If any of you have visited my book’s page on Amazon recently, you have seen a scary message like this one: “Available only through third-party vendors.” I don’t see that message today, but the page still does not say “In Stock,” nor does it give any hint of how long it will take you to get a copy. (Last week it said “Usually ships in 2 to 4 weeks.”)

What is the problem? The short answer: Amazon is sold out. Yes, that’s right, the company that has everything does not have a single copy of The Book of Why.

But there’s a more interesting answer behind that. The publishing industry has (in the words of my editor) been in a state of utter bedlam this fall because of two things. First, we are experiencing one of the worst paper shortages in years. (Bet you didn’t know that.) Second, there is an apparent undersupply of labor and printing press availability. According to this article in Publishers Weekly, the 5th largest printer in the U.S. unexpectedly went out of business this year, and the 3rd largest printer is in bankruptcy. (It’s expected to survive.)

Even for publishers who don’t use those printers, there is still a ripple effect as everybody scrambles to find a printer with available capacity. My editor tells me that they ordered the next printing of my book (the fifth, I think, or maybe the sixth), 4000 copies, back in early September. Ordinarily, he said, that order would take 15 days to fill. But they’re still waiting. A few days ago he told me that the books were expected in the warehouse on November 2, but now he’s telling me that they will come on November 16. Which means that Amazon will not have any copies of The Book of Why until then, unless they go looking under park benches and in dumpsters.

There are a couple of things to be thankful for, although only in a silver-lining-dark-cloud sense. First, The Book of Why is still available in bookstores and at Barnes and Noble online. Perhaps this printing shortage will weaken Amazon’s grip on the U.S. book market, which is not necessarily a bad thing. Second, as my editor points out, at least The Book of Why came out last spring, and so it had about five months of relative normalcy before the printing shortage began to affect sales. That means it reached a lot of people already, it developed good word-of-mouth, and I don’t think that the supply shortage will affect it in the long run. But for new books that came out in October, the shortage could be a kiss of death, preventing them from ever gaining momentum and generating word of mouth sales.

You can really see the effect of the printing shortage in my book’s latest Nielsen BookScan totals. Here is a graph of its weekly sales for the first 24 weeks of its existence:

For the first 23 weeks, it looks like a Poisson distribution with added noise, and perhaps a heavier tail. For non-mathie folks, here is what Poisson distributions look like. I think that the green one is the best match for the Book of Why sales graph. 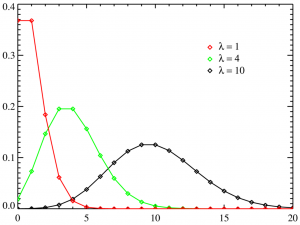 But then in week 24, the sales dropped from 239 books to 81 — nearly a threefold drop! I expect that week 25 will be even worse, with no Amazon sales. Amazon is supposedly about two-thirds of the U.S. book market.

(By the way, you can see a few other interesting things about the Book of Why sales graph. Our peak, in week 2, was 1459 copies. As a rough estimate, you need to sell about 3000 copies a week to make it to the hardcover bestseller lists. So after I saw the downturn in week 3, I knew we were never going to be an official bestseller. The second peak, 1254 copies in week 4, came after the New York Times reviewed The Book of Why. The third peak, 567 copies in week 9, came for unknown reasons. Maybe Amazon just lowered its price that week. The fourth peak, 532 copies in week 14, came after our book was made an alternate selection for something called the Next Big Idea Club. I am still waiting for the fifth peak… maybe after the supply crisis abates.)

All this stuff about printers reminded me of something I almost never think about any more. When I was in college, I worked for four summers at a printing press. Although I was in the front office and didn’t go back into the production area too often, I always enjoyed it when I got the chance. It was a technological marvel. Those huge machines slap ink onto paper and fold it up and bind it faster than the eye can see.

That experience taught me that a book or a magazine is not just a collection of fine words and brilliant ideas. It is, first and foremost, a physical object that somebody has to produce. Those beautiful ideas would be worth nothing if we didn’t have the physical means to manufacture and distribute books in large quantities. The Internet has changed things a little bit, but not as much as you’d think. Gutenberg’s invention of the printing press (and all the improvements that have followed) is still king. You just don’t appreciate it until suddenly you don’t have it any more.