The Story of The Big Splat 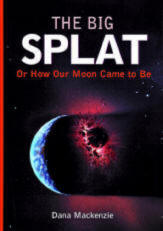 The idea for my first book, The Big Splat, or How Our Moon Came to Be, came out of a meeting that I covered in 1998 for Science magazine. It was a conference about the origin of Earth and the Moon, and I was the only reporter there. In three days of talks, I was astounded to hear over and over about the giant impact theory of the Moon’s origin — a theory that was completely unfamiliar to me, and yet was really the only one seriously discussed at this conference. I was amazed that the experts had more or less agreed on where the Moon came from, and yet no one outside the planetary science community knew about it! There was clearly a failure of communication between scientists and the public. It was up to me to bridge the gap.

Writing the book was a lot of fun. It was the perfect size for a first book. It came out to be twelve chapters long, and I had about twelve months to write it. That meant that I had to tell one in-depth story a month, which was just the right pace for me. I enjoyed the feel of working on a long-term project, as a change of pace from jumping around from one article to another.

A special treat, which I did not at all anticipate, was doing historical research with original documents. To research one chapter I traveled to Cambridge, England, to delve into the Charles Darwin papers. (What does Charles Darwin have to do with the Moon? Read my book to find out!) It’s hard to express the thrill of holding in my hands a letter that Darwin sent to his son a century ago, realizing that I might be he first person to read it since then.

The Big Splat came out in the spring of 2003, and received excellent reviews. Booklist, a magazine published by the American Library Association, named it as one of their Editor’s Choices for 2003 — an honor accorded to only 63 books that year, and only four science books. Much, much later, Audible.com produced an audiobook version, and not only that, they named it to their list of the best audiobooks of 2010! This was an unexpected treat in a business where the vast majority of books are forgotten and/or remaindered within a few years of their publication, and surely don’t win prizes after that length of time.