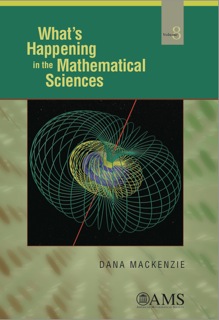 What’s Happening in the Mathematical Sciences, Volume 8 covers the years from 2008 to 2010. Below is an annotated table of contents.

Cover picture (foreground): The Hopf fibration arises from a topologically non-trivial way to map a 3-dimensional sphere (or “hypersphere”) into the ordinary 2-dimensional sphere. Maps of this type help topologists understand the structure of exotic spheres and other high-dimensional spaces. (See Chapter 9.)

Cover picture (background): The standard contact form in 3-dimensional space is illustrated as a field of planes. (See Chapter 2.)