Although I recently had a small reminder of the value of humility, today I’m going to soldier on in my immodest way and celebrate the first anniversary of one of the most exciting days of my life, the publication day of The Book of Why.

Being a writer, especially of books, is a strange business. You have to spend a very long time, months to years, working on a project with almost no encouragement or validation. It’s just you and your editor, and your co-author if you have one, as I did. You have to believe very strongly in what you are doing, because for the longest time that belief is the only thing that sustains you.

Then comes publication day, and suddenly the validation is very visible and very public. It’s like emerging from a cave into the dazzling sunlight. It may not have always been this way, but nowadays we have Amazon, which gives a writer immediate, hour-by-hour feedback on how the book is selling. Not actual sales figures but a ranking, which to a ratings junkie like me is like an opiate. (I used to religiously listen to American Top 40 every week as a teenager.)

A year ago today I got online at Amazon and checked my ranking. #5027. I was actually kind of disappointed, because it had been in the 4000’s the previous day due to pre-publication sales, and so it didn’t look as if publication had actually made much difference.

Although that day was thrilling, for the most part that isn’t what the book business is about. What really matters is the next 364 days… and the 365 days after that… and so on. Thank goodness, the book business is the ultimate long-tail business. The value of a book is not measured by how many copies it sells on the first day. Thomas Kuhn’s The Structure of Scientific Revolutions sold less than 1000 copies in its first year.

Over the last year, the reviews have been pretty good, the sales have been pretty steady, and Judea and I keep seeing encouraging signs that our message has been heard. For example, just a week ago he sent me an article about the head of artificial intelligence at Toyota, who basically quoted straight from our Chapter 1. We had written about something called the ladder of causation. The Toyota guy renamed it as “the ladder of autonomy,” which I think is an even better name within the context of AI. This is great! When people are taking your ideas and re-thinking them, it really shows that you are getting somewhere.

Of course this success is 99 percent due to Judea. I have no illusions about that. I am just enjoying being along for the ride.

Anyway, this morning, just for old time’s sake, I got onto Amazon and checked our book’s ranking. #6546. It won’t be zooming up into the 3000’s or 2000’s or 1000’s today. But after a whole year it’s still #1 in the “Discrete Mathematics” category and therefore gets the little “#1 Bestseller” ribbon when you visit its Amazon webpage. That’s totally not shabby. I don’t think that very many books are #1 in any category after a year, and I hope it means that people think our book has lasting value.

Amazon also does provide actual sales numbers to authors, courtesy of Nielsen BookScan. Those numbers update once a week instead of once an hour. I know that people reading this blog have been curious about it in the past, so here is a graph of the first year of retail sales for The Book of Why, week by week. This isn’t actually all sales — for example, textbook and book club sales are not tabulated — but it’s close enough to give an author an idea of how the book is doing. 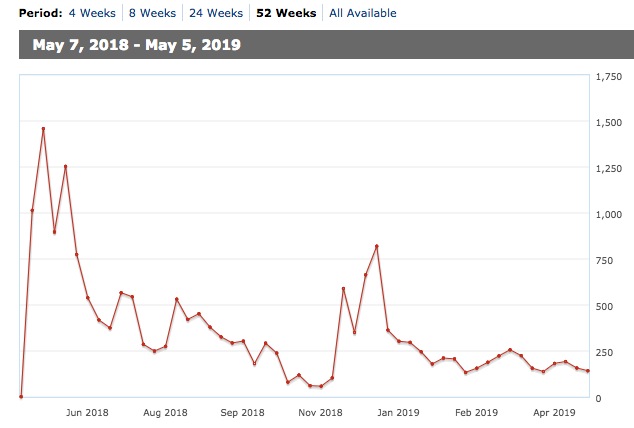 Who knows what the next year holds in store? For all the people who have sent their compliments, criticisms and questions to Judea and me (mostly to Judea), we have appreciated hearing from every one of you.