The Book of Many Titles Returns 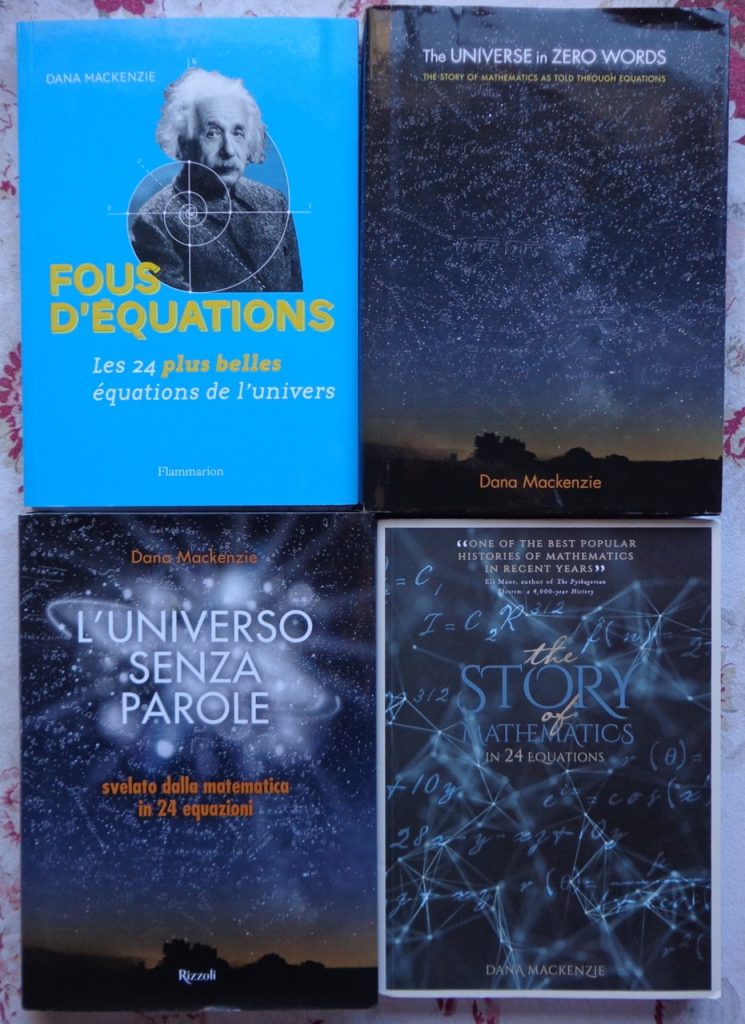 Once upon a time, I wrote a book. Interestingly, the idea for the book was not mine. A book packager named Elwin Street Productions, in London, came to me with a proposal for a history of the greatest equations in mathematics. The book came out in 2012 as The Universe in Zero Words, co-published by Elwin Street and by Princeton University Press.

To understand this story fully, you do need to understand a little bit about the book business. A “packager” is not a publisher per se. What they do is put together a book package — words by an author, images from various sources — that they shop around to traditional publishers. It’s a somewhat common procedure for image-intensive books. (Think Time-Life books, for example.) For me, it was fun to work on a book where the images would be such a big part of the finished product. This went along very well with a constant theme of the book, the idea that mathematical equations can be beautiful.

Over the years the book was translated into other languages, with other titles. The French edition was Fous d’Equations (Crazy about Equations), which I thought was a great title. The Italian edition was more or less a direct translation, L’Universo senza parole (The Universe without Words) but had a different subtitle (Mathematics Revealed in 24 Equations).

Everything was fine until last winter, when I was informed, to my surprise and dismay, that Elwin Street was leaving the co-publishing agreement with Princeton University Press. In part, the reason is that they are converting their business so that they will be an actual publishing house. Therefore, they wanted to be able to publish my book themselves in the U.K. market. I do not know or understand why they wouldn’t let PUP continue to publish the book in the U.S. I definitely do not agree with their decision. However, because Elwin Street owns all the rights, it’s their decision to make. They are currently looking for a new U.S. publisher.

Anyway, for every dark cloud there is a silver lining. My book now has a new edition in England, and it has yet another new title! It’s now called The Story of Mathematics in 24 Equations, which I think is probably more appealing and less confusing than the original title. I now think that the original title, The Universe in Zero Words, even though it was my idea, was not a particularly good one. The only people who understand it right away are mathematicians; for everyone else, I have to explain it.

For any readers in England who might come across it in a bookstore, the new edition is almost identical to the old one. The figures are the same. I made a few small corrections to the text, but there have been no major additions or deletions. The main differences are that it is a paperback and it has a beautifully re-designed cover, which goes better with the design scheme of the interior. It remains a gorgeous book to look at, thanks to all the color pictures. If you purchased the old edition, there really isn’t any need to buy the new one. However, I suspect that there is a large market out there of people who never heard of the first edition, and I am delighted that Elwin Street is giving my old book a second chance to reach them.

I hope that American readers will also get another chance (eventually) to buy The Book of Many Titles, but we’ll have to wait and see!