Today Jen Golbeck’s interview with Judea and me for the Science (magazine) Podcast went up, and you can listen to it here. (Alternatively, for the next 7 days, you can also go to the main Science magazine website at www.sciencemag.org and scroll down to the podcast.) The book review segment starts at 18:48 with a long-ish introduction by Golbeck, and the actual interview starts at 20:35 and lasts to 26:05.

Some thoughts: I do wish we had had more time. Basically Judea and I got to answer two questions each, and we got to discuss only about three topics out of a 400-page book. I have to blame myself for giving too rambling an answer to my first question. I kept saying “and this…” “and that…” If you wrote a transcript of the interview, you would probably find that I crammed about five sentences into one. A good thing to avoid in the future! 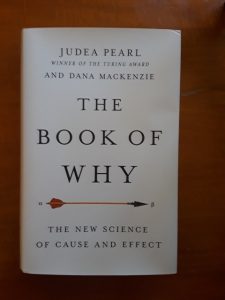 On the positive side, I thought Judea sounded very patient, reasonable, and persuasive. I think that between the two of us, we very clearly expressed one of our central ideas, which is that causal diagrams allow scientists to express their assumptions in such a way that they are visible and can be discussed by others. A point that was less apparent is that causal diagrams also guide you toward the right way to analyze your data.

One interesting point for very sharp-eared listeners: this may well be the first Science Podcast with a laugh track! My wife was listening to the interview as we recorded it, and at the 25:41 mark I said something that made her laugh. I think that Jen Golbeck tried to edit it out, but didn’t completely succeed. (It was when I talked about an “outbreak of common sense.”)

Outtakes: What Didn’t Make it into the Podcast?

Golbeck asked each of us, “If you could put your book on the desk of one person, who would it be?” Judea said he would like the book to be read by economists. He feels that economics is one discipline that has resisted his graphical approach to causality.

My answer was “Ruth Bader Ginsburg.” In our book we discuss the long tradition of counterfactuals in the law. (A defendant is guilty if the victim would have been unharmed but for the defendant’s actions. “Would have” and “but for” express a counterfactual condition.) I would like lawyers to be aware that some scientists now are taking counterfactuals seriously, and that we have algorithms that can perhaps improve our ability to make such judgements. In particular, I know that some members of the Supreme Court are skeptical of gerrymandering measures that rest on counterfactual conditions, and I would like to alleviate some of their concern.

Another answer that was edited out: I told Golbeck about a question that Judea once asked me, about a month after the book came out: “Why was it necessary for me to go behind my colleagues’ back and address the public in order to get my colleagues’ attention?” My answer was: “First, I’m not sure you did go behind their backs. But if you did, it’s only because they themselves turned their back on the public.” I think that this experience has totally sold Judea on the fact that it’s not just good publicity to face the public — it’s good science, too.

P.S. It was a great day for Santa Cruz on the Science Podcast! The interview just before ours was with Emily Brodsky of UC Santa Cruz, who talked about human-induced earthquakes.