Eclipses, such as the partial (annular) solar eclipse that was seen in the western U.S. yesterday, are one of my favorite opportunities for participatory science. It’s commonly said that to watch a solar eclipse, you need to look at the image of the sun through a pinhole. And it’s certainly true that you shouldn’t look directly at the sun. However, if you don’t happen to have a pin and a piece of paper handy, all is not lost. All you need to do is find a leafy park or street. 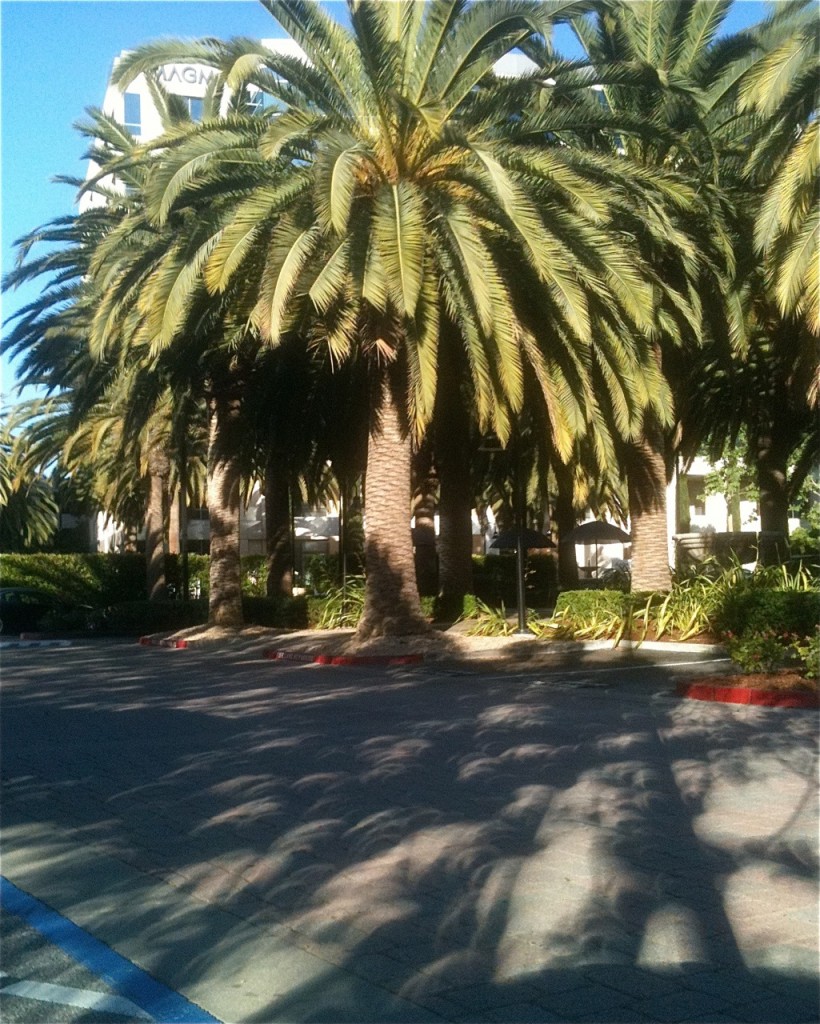 Do you see all those sickles of light on the ground? Every single one of them is a pinhole-camera image of the sun being eclipsed by the moon. The “pinholes” are the gaps between the palm leaves. It seems as if nature itself is celebrating the event, by scattering live video feeds all over the landscape. 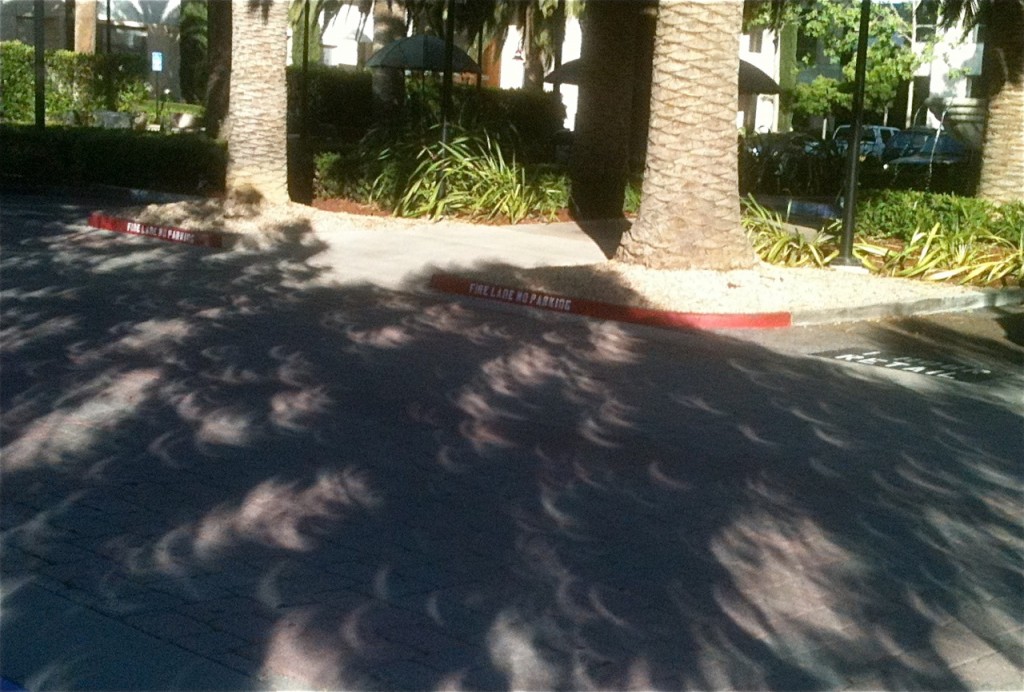 How many crescent suns can you count?

In San Jose, where I took these pictures, the eclipse only got to 84 percent of totality. Some places in the U.S. got to see an annular eclipse, where the moon is completely surrounded by a “ring of fire.” Then there would have been a lot of O’s on the ground instead of C’s.

Not only are eclipses fun and beautiful, they are also mathematical! Have you ever wondered why we don’t get eclipses every month, when the moon is between the sun and earth (at new moon)? The reason is that the moon’s orbit around Earth is inclined by about 5 degrees, so most of the month the moon is either north or south of the ecliptic plane — the plane of Earth’s orbit about the sun. So the moon is either too high or too low in the sky to eclipse the sun.

But that’s only partially correct. If the moon isn’t there at just the right time, it will be at most a few days early or late. Though the sun’s position will shift in that time, it won’t shift very much. The moon might not hit the target dead center, but you’ll still get an eclipse. It just won’t be as good an eclipse — it won’t last as long, or it may be only partial.

Now an annular eclipse, like the one some parts of the world saw yesterday, brings to the fore a whole different aspect of the moon’s rotation. The moon orbits around Earth in an ellipse, not a circle. When it’s at the near end of the ellipse, it looks larger and it’s able to block out the entire sun. When the moon is at the farthest end, it looks smaller and it’s not able to block out the entire sun. That’s when you have an annular eclipse.

The perigee and apogee (the points of the moon’s orbit closest to and furthest from Earth) are not necessarily aligned with either the sun or with the ascending/descending nodes. All three of these key ingredients are constantly in motion, and this means that no two eclipses are ever the same!

Taking a view with the earth at the center (as we did before Copernicus, Kepler and Newton taught us what is really going on), the sun goes around us once a year. The line of apsides (i.e., the line containing the apogee and perigee) goes around once every 8.85 years. The line of nodes goes around once every 18.6 years. These three reference points are like the second hand, the minute hand, and the hour hand of a clock. And when they all line up, you get a really special eclipse.

Unfortunately the moon was near its apogee this time, so it appeared especially small and we got an annular eclipse. But on the positive side, the duration of the eclipse was longer than any that will be visible in the U.S. until 2046. And who knows if I will be around to photograph that one?

For more information, check out the Wikipedia links here (list of solar eclipses) and here (lunar precession, explaining the line of nodes and the line of apsides).