Bestsellers and Goodsellers: A One-Month Retrospective

I think it’s likely that every author who has ever published a book has wondered if it has what it takes to be a bestseller. There was even a day or two last month when I thought The Book of Why might have a serious chance to make a bestseller list. But it didn’t, and the experience has taught me something valuable about bestsellers versus goodsellers.

In chess terms, it’s like the difference between a player who is good enough to be invited to the U.S. Championship (i.e., one of the best 10 or 20 players in the country) and a National Master (which means roughly being in the top thousand in the country). Except that in book-land, the playing field is much less level than in chess. If you notice, the bestseller lists, especially in nonfiction, are crowded with books by celebrity authors, or people who are famous for something other than book writing. Also, in book-land, there is an incredible variety of outstanding books. You could write the best book ever about fungi, and it will have no hope of making the bestseller lists — but you can be sure that it will reach an audience who love that book.

In short, the landscape of book success is much more varied and nuanced than the landscape of chess success. And chess success, too, is more varied and nuanced than we sometimes think it is. Making grandmaster is hardly the only way to succeed. You can be a great organizer, or a great teacher, or run a great chess website. All of these are ways of making a mark upon the game.

Anyway, one month into its run, The Book of Why is looking like a really strong goodseller but not a bestseller. My editor just sent me sales figures today, and he was extremely happy with them. My book is in its 32nd consecutive day in Amazon’s top 1000, although it is just barely hanging on: 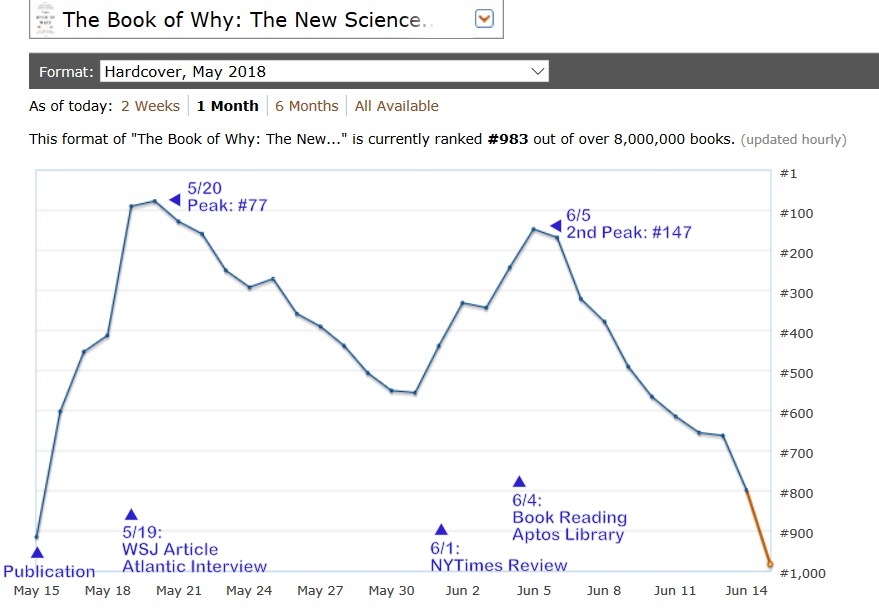 To put this into perspective, there are tons of great books that aren’t in the top 1000. My first book, The Big Splat, never came anywhere close; as far as I know, the highest it got was #5230 (although back then I did not pay as close attention to the Amazon rankings, so I don’t know for sure). So for me, it was an incredible thrill when The Book of Why reached #915 in its very first day on the market. Having a three-digit number for a ranking almost looked like a misprint, like seeing a six-digit phone number!

Another thing that’s cool about this graph is that you can see numerically how key events affected the book’s sales. We hit a trifecta of big publicity coups in the first month. Two of them hit on the same day: our Wall Street Journal article and the interview of Judea Pearl (my co-author) in The Atlantic. When you look at the graph, you can kind of see the book maybe starting to level off around #400 until those two articles hit, and then it shot up from #412 to #90 in one day. That was extremely exciting, because when you’re in the top hundred your book starts to appear on Amazon’s “Top 100” page.

I think that Amazon’s Top 100 is a rough line of demarcation between the goodsellers and the bestsellers. For a few hours, The Book of Why was rubbing elbows with some true bestsellers. The 17th Suspect by James Patterson (the bestselling writer in the English language after J.K. Rowling). War on Peace by Ronan Farrow (son of Woody Allen and Mia Farrow). But here’s the catch. Those books were in the top 100 for a whole week (or a lot longer). My book burst into the top 100 for less than 24 hours, and then it was gone. Judea and I would have made the bestseller lists only if we could have arranged to have publicity nonstop for an entire week. That was never realistic.

But we did have one more publicity coup, the extremely favorable review in the New York Times on June 1. Again the effect on the Amazon rankings was electric. Our book had been sagging down below #500, and suddenly it shot up again to #147. I think that this second surge was quite a bit more unexpected, in Amazon’s mathematical models, than the first one. They completely ran out of stock; the book went from “In Stock” to “Ships in 1-2 days” to “Ships in 2-3 days” to “Usually ships in 1 week” to “Usually ships in 2-5 weeks.” That last one worried me a bit, because if I were a book buyer, I might be turned off by the idea of having to wait for two weeks. Fortunately, that message was soon replaced by “Will be in stock on June 14,” and indeed The Book of Why is now back in stock.

Looking at the graph, I think you can predict with some confidence that The Book of Why will drop out of the top 1000 very soon — either today or tomorrow — unless and until another unexpected event occurs. But I’m not too upset at that prospect. As I said, there are many flavors of success, and being in the top 1000 is only one of them. And also, there is the delicious suspense of wondering whether there might be another surprise in the book’s future that might send its ranking back up again. Who knows? We’ll have to wait and see! Anyway, as long as the editor is happy, and the readers I’ve heard from are happy, then I’m happy too.

By the way, it’s now been a day since I wrote this, and we’re still hanging in the top 1000 on Amazon. Day 33 and counting! (Amazon raised the price on Day 30, which may be one reason the book dropped rather abruptly from the 600’s to the 900s. Yesterday Amazon lowered the price again.)