In honor of Women’s History Month, I would like to tell the story of one of the truly unsung heroes of The Book of Why: Barbara Stoddard Burks, who was to our knowledge the first social scientist ever to use a causal diagram.

The early years of the 20th century were a difficult time for any woman trying to make a career in science, but Barbara Stoddard Burks was no ordinary woman. Twenty years later, she described herself in college as “an ignorant, eager, and cocky young person who was all fired up over science.” Her father wrote a letter of introduction to her future mentor, Lewis Terman, and warned him, “You may be a little surprised from time to time at what might appear to be unconventionality or undue spontaneity in her contacts.” And Terman himself wrote, “… her ability was somewhat tempered by her tendency to rub people the wrong way. I think the trouble lay partly in the fact that she was more aggressive in standing up for her own ideas than many teachers and male graduate students liked.”

Burks graduated from Stanford in 1924 and earned her doctorate in psychology in 1929, working under Terman. It’s important to know who Terman was: the chief developer and propagandist of the Binet-Stanford IQ Test, and a psychologist passionately devoted to the idea that intelligence (or genius, a word that Terman did not hesitate to use) is inherited. This subject also became the subject of Barbara Burks’ research. As a graduate student she visited more than 200 homes of foster children, grading the home environments of the children and giving IQ tests to them and comparing them to biological offspring in order to tease apart the role of environment (“nurture”) and genetics (“nature”). 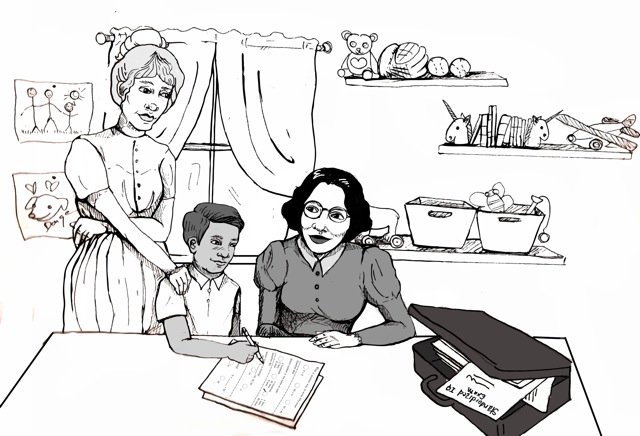 Drawing by Dakota Harr for The Book of Why.

The results of Burks’ thesis could not have been very satisfying to Terman; she estimated the genetic component of IQ at around 35 percent — far short of the 80 percent or so that Terman expected. Nevertheless, he later wrote, “This study deserves to be ranked among the dozen or so most important contributions in the history of nature-nurture research from Galton to the present.”

While she is best known for her work in psychology (see this article for a fuller discussion), it is Burks’ role as an advocate for causality that interests us the most. Very early in her graduate student career, she realized that the subject of statistics had no very good criteria to determine which variables in a study should be “controlled for” in order to keep them from contaminating the analysis. She drew a diagram like this, the first example of a causal diagram in social science: 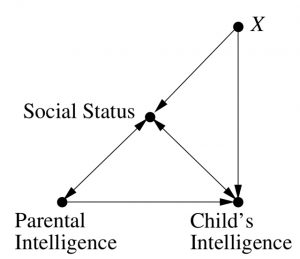 Here X stands for what she called “other unmeasured remote causes.” These are factors that could affect both the home environment (Social Status) and the child’s IQ score; we can only speculate on what they might be, but perhaps Parental Motivation might be an example. The two points that concern us, are: 1) she thought of the arrows as representing causes, and 2) she realized that the diagram invalidates the otherwise attractive idea of controlling for social status. You might think that comparing families of equal social status would be a good way to eliminate the effect of social status on the child’s IQ score. But Burks realized that this procedure would lead to a biased estimate, because controlling for social status creates a spurious association between Parental Intelligence and X (Parental Motivation?). In the terms we use in the book, Social Status is a “collider,” because it has two arrows coming into it.

Let’s put this diagram into historical perspective. Causal diagrams (or path diagrams) had just been invented, 6 years earlier, by Sewall Wright, a geneticist. Burks is, to the best of our knowledge, the first researcher from another science to adopt Wright’s invention. And not only that, she did things with it that Wright had not yet thought of. The idea that controlling for a collider can bias your results is here demonstrated in a diagram for the first time. She continued to use path diagrams throughout the 1930s, even though they were hardly a standard statistical methodology.

Unfortunately, Burks’ career, which began with such promise, was stunted by the social environment of her time and by personal tragedy. After getting her PhD at Stanford she could not obtain an academic position, and she started her career as a school psychologist in Pasadena. Later she did get research positions, notably at the Carnegie Institute, but never a professorship — something that should have been easy for someone with 59 research publications during her lifetime. Was it because she was a woman? Was it because she rubbed people (that is, male people) the wrong way?

In 1942 she got engaged to a colleague, which one might have expected to mark an upturn in her fortunes; instead, she went into a deep depression. “I am convinced that, whether right or not, she was sure some sinister change was going on in her brain, from which she could never recover,” her mother, Frances Burks, wrote to Terman. “So in tenderest love to us all she chose to spare us the grief of sharing with her the spectacle of such a tragic decline.” On May 25, 1943, at age forty, she jumped to her death from the George Washington Bridge in New York.

I feel as if there is so many unanswered questions about Barbara Stoddard Burks, so much that we will never know. But I am happy that Judea and I were able to give her some belated credit in our book.