The Cattail Remedy: Mediation for Ecology

(From the first draft of The Book of Why. This section originally appeared in Chapter 9, Mediation: The Search for a Mechanism, but was deleted for reasons of space. Copyright © Judea Pearl and Dana Mackenzie.)

I have chosen my third example partly because it illustrates the application of causal analysis to a field where such techniques are brand new: ecology. Each science seems to need a trailblazer to convince other people in that field that causal analysis is both applicable and vital to progress. James Grace, an ecologist for the U.S. Geological Survey, has been one of these trailblazers.

Recently, Grace was asked by biologists at Acadia National Park in Maine to study the factors leading to overgrowth of cattails in the park. The only national park in New England, Acadia is noted for its rugged, scenic coastline. However, the park is not all cliffs and pounding waves; twenty percent of it is comprised of wetlands, and the park’s bogs and marshes provide habitat for several species of endangered plants.

The biologists were concerned that the invasion of cattails would jeopardize the diversity of their wetlands. This has already happened in the Everglades in Florida, where cattails loved the phosphorus-rich runoff water from sugar cane fields. “Typha [cattails] are world-famous for invading wetlands when they receive excess nutrients, and eventually you lose all the natural characteristics of that wetland,” Grace says. Could the same thing happen at Acadia? 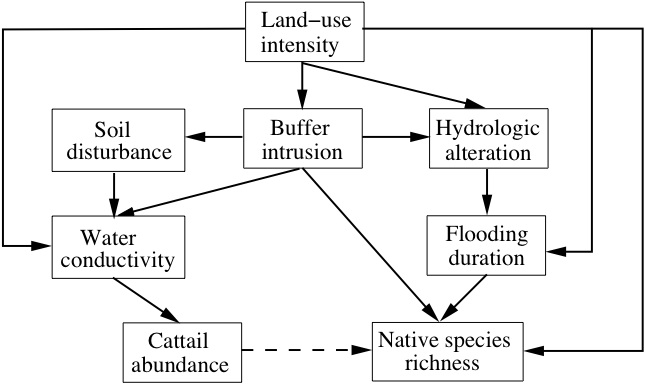 To analyze the ecosystem at Acadia, Grace worked with park biologists to set up a causal model, which is illustrated in Figure 10. This is a relatively complex diagram, so I will direct your attention to just two parts of it. One is the causal pathway:

The other is the pathway:

In the end, Grace’s study gave the biologists some reassurance but also gave them a much better sense of what to worry about. Grace found that the total effect of land-use intensity on native species richness was the loss of nine species for each one-unit increase in land-use intensity (which was measured on a scale of 0 to 3). About half of this loss, he found, was an indirect effect attributable to the first causal pathway. However, the contribution of the second pathway was negligible; the data did not support the dashed arrow from Cattail abundance to Native species richness. Acadia did not have a cattail problem but a water flow problem.

Grace’s report had significant practical consequences. It impressed upon the park managers the need to monitor the water conditions in the park’s wetlands and around the park perimeter. To that end, the park asked for and received funding from the Environmental Protection Agency to step up their monitoring efforts. It also gave them hard evidence that they could use in advocating against land development around the park. “This was, hopefully, a ‘crisis averted’ situation where we caught the problem and developed a solution before things got badly degraded,” says Grace.