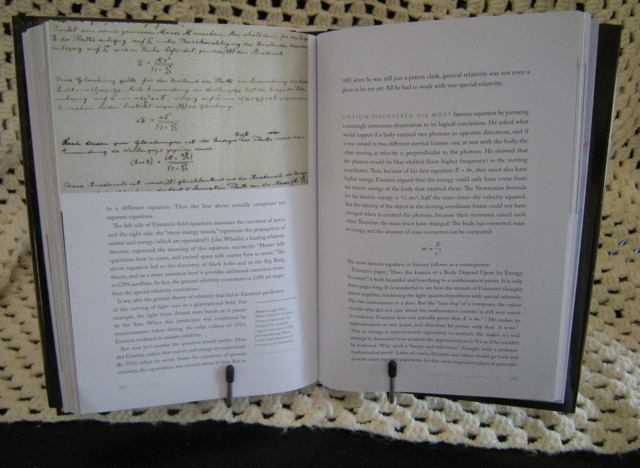 Most popular books about science, and even about mathematics, tiptoe around equations as if they were something to be hidden from the reader’s tender eyes. Dana Mackenzie starts from the opposite premise: He celebrates equations. No history of art would be complete without pictures. Why, then, should a history of mathematics — the universal language of science — keep the masterpieces of the subject hidden behind a veil?

The Universe in Zero Words tells the history of twenty-four great and beautiful equations that have shaped mathematics, science, and society — from the elementary (1 + 1 = 2) to the sophisticated (the Black-Scholes formula for financial derivatives), and from the famous (E = mc²) to the arcane (Hamilton’s quaternion equations). Mackenzie, who has been called a “popular-science ace” by Booklist magazine, lucidly explains what each equation means, who discovered it (and how), and how it has affected our lives.

Illustrated in color throughout, the book tells the human and often-surprising stories behind the invention or discovery of the equations, from how a bad cigar changed the course of quantum mechanics to why whales (if they could communicate with us) would teach us a totally different concept of geometry. At the same time, the book shows why these equations have something timeless to say about the universe, and how they do it with an economy (zero words) that no other form of human expression can match.

The Universe in Zero Words is the ultimate introduction and guide to equations that have changed the world.

Praise from other writers:

“Demanding very little prior mathematical knowledge, this is one of the best popular histories of mathematics in recent years. Dana Mackenzie’s prose is lively and easy to read, and his mix of historical background and personal biographies of the main characters is engaging.” — Eli Maor, author of The Pythagorean Theorem and e: The Story of a Number.

For a personal account of how I wrote this book and why, click on The Story of The Universe in Zero Words.

Exclusive! For a peek inside the book that not even Amazon can give you, scroll down.