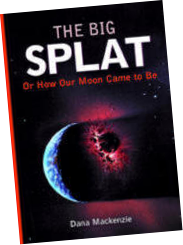 The Big Splat, or How Our Moon Came to Be is an intriguing celestial whodunit that traces the long story of humanity’s fascination with the Moon. What is it? How did it get there? Beginning in the nineteenth century, the question of the Moon’s origin moved from the realm of speculation to evidence-based theory. Three theories, in fact, all based on (somewhat) sound scientific principles. The leading scientific mission of the Apollo missions was to break this intellectual logjam and tell how the Moon really came to be.

But a funny thing happened when Apollo went to the Moon. None of the theories could successfully account for the chemical composition of the Moon rocks and the Moon’s geological history. All three theories turned out to be impostors! Instead, planetary scientists now accept a fourth theory as the most likely explanation. (SPOILER ALERT! Skip the next paragraph if you want to find out the answer from the book.)

Earth actually collided with another planet, which I call Theia, when our planet was about 1 percent of its present age. This was the most cataclysmic event in Earth’s history, trillions of times bigger than the meteorite impact that killed the dinosaurs. It nearly destroyed our planet, but instead it gave us a new satellite, which formed out of the debris of the collision. The giant impact theory (or “Big Splat,” as I call it) actually explains much more than the origin of the Moon; it is part of a whole new understanding of the formation of planetary systems. To quote Nature magazine: “Mackenzie’s book emphasizes the fact that impacts have been the primary creative and destructive process throughout the history of the Solar System.”

The Big Splat tells the fascinating story of how real science is done, how scientists make mistakes and don’t always find what they expect to. If you’ve ever wondered what we learned from the Apollo missions, you must read this book!

For a more personal account of how and why I wrote this book, please click on The Story of The Big Splat.