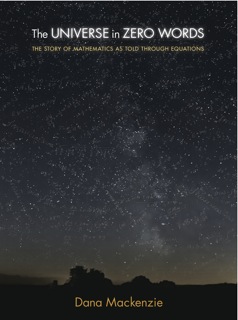 My first book, The Big Splat, did not make me rich. In fact, it just about did the opposite. So I wasn’t in a big hurry to write my next book. I wanted to write another one but it would have to be a topic that grabbed me. Also, I felt a little guilty, as a mathematician, that I hadn’t written about math in my first book.

In 2008, Elwin Street, a book publisher and packager based in London, contacted me because they were looking for a writer for a book on the history of equations. Until this point, I had been very steeped in the mythology that a book must be born out of the fevered imagination of its author. Did anyone tell Hemingway what to write about? But after I thought about it, I got used to the idea. When I write for magazines, I am completely comfortable with writing about topics that have been suggested by my editors. Why should a book be any different?

But more importantly, Elwin Street’s idea appealed to me. First, it would be a math book. And second, it would flout a journalistic truism I had learned way back in 1997, when I was a student in the Science Communication Program. One of my teachers (or perhaps one of our guest lecturers) explained why you never see equations in popular science articles: “For every equation you put in, you will lose half of your audience.” So if you include a dozen equations or so in your article, the only people left reading it will be you and your mother! (And even she might put it down.)

However, I’ve never actually seen any data to support this assertion, and it always seemed to me that it underestimates the intelligence of readers. Not only that, equations are beautiful! A good equation is a wonder of preciseness and conciseness, expressing exactly what is true in the most economical form possible. In zero words.

So that’s why I wrote The Universe in Zero Words, a history of the 24 greatest equations in mathematics. It is my attempt to end the censorship of equations in popular science writing. I hope that readers will enjoy learning what the equations mean, and they will no longer see them as something mystical or forbidding. I have tried to convey this sense of meaning through stories, through simple explanations and examples, and through my personal passion. There is a lot of me in this book. Even if it was first conceived by a group of editors at Elwin Street!

And by the way, did I mention that those editors did a great job of illustrating the book? It is one of the most eye-catching mathematics books around, and I think that all of the colorful illustrations reinforce one of the most important themes of The Universe in Zero Words: Mathematics is beautiful.