It’s long past time for me to continue my series on the Bird (or, more properly, the Blackburne) Variation of the Ruy Lopez. International Master Mark Ginsburg finally gave me the motivation that I needed, by writing in his blog the following comment:

Here, let me make a slight interjection. If you read my previous “Bird by Bird” posts carefully, you’ll see that I said all along that I would discuss 6. c3 eventually, and in fact I do consider this the most principled plan for White, rather than playing for a kingside pawn storm with 6. d3 and 7. f4. Ginsburg continues:

I’m delighted that IM Ginsburg wrote this, because he falls into a basic misconception about this variation that is exceedingly important for you to understand if you intend to play it. His misconception is that Black is obliged to recapture on d4. But he’s not!

Lest it seem as if I’m coming down too hard on him, let me say also that it took me more than 10 years of playing this variation before I grasped this point myself. So it’s not obvious. I think that the best way to proceed in this variation is chronologically, so you can see what led me to this conclusion.

So, back in the innocent days of 1996, in a game against Jacob Chudnovsky, I proceeded exactly as Ginsburg says, and I got a terrible game. So he’s right about that! Let’s see what happened: 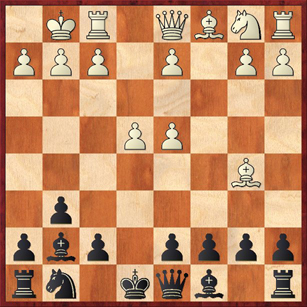 The basic starting point for what I call the Chudnovsky Sub(-sub-)Variation, because this is the game that first made me realize Black had problems here. Here, as in Ginsburg’s analysis, I played

Ginsburg says that 8. d3 is probably better. But Black gets in bad enough trouble even in this line.

A quiet move with lots of venom. One big problem for Black in this variation is all those weak dark squares on the kingside.

Right plan, but too late. 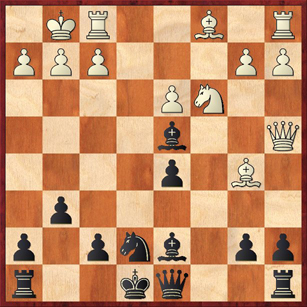 Black is forced to lose time because of the attack on his bishop, and that’s bad news because it means that his king will be stuck in the center. The only halfway reasonable move for Black is 13. … Bxc3, but this is a huge positional concession. After 14. bc Bxb5 15. Qxb5+ Qd7 16. Rb1! (another nice, calm move by Chudnovsky) White should be winning, although I miraculously managed to draw the game.

I tried some improvements on move 9. For example, I played 9. … Bg7 once or twice, but it was just too passive. I tried 9. … Nc6 once, but White is again probably winning after 10. Bh6. The trouble in all these games was that I didn’t get in my thematic freeing maneuver, … c6 and … d5. And yet the Chudnovsky game seemed to show that Black could not get away with 9. … c6 and 10. … d5. For a long time I thought that this variation might be busted.

It was actually through playing training games against Fritz that I realized what the solution was. Black’s mistake was way back on move 7, the “basic position” above, when I played the seemingly automatic recapture, 7. … Bxd4? Instead, Black MUST on this move interpolate 7. … c6! I cannot emphasize this strongly enough.

Furthermore, Black should keep the following points in mind:

Now let’s look at some games that illustrate these themes. 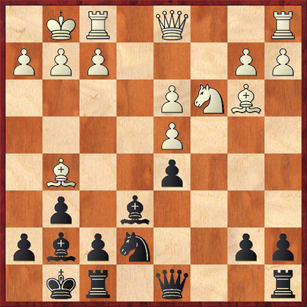 Here it looks as if White is starting to get some serious pressure against Black’s position. But this is a good time to remember that Black can afford to sacrifice the d5 pawn. Thus, in this position, Black can play simply 13. … h6 (or, maybe even better, 13. … Qd6) inviting White to carry out his plan! After 14. Bxe7 Qxe7 either capture on d5 gives Black lots of counterplay. After 15. Nxd5 Bxd5 16. Bxd5 Rd8 etc., the additional presence of bishops of opposite colors gives Black extremely good chances of a draw. Notice that Black will be happy to trade b-pawns too, because he will get a rook on b2 and a bishop on d4 bearing down on White’s sensitive f-pawn. Or if 15. Bxd5 Bxd5 16. Nxd5 Qd6 17. Qb3 Rd8 18. Ne3 Qxd4, again Black has lots of pressure on the d-file and lots of pressure on the long diagonal. We don’t have bishops of opposite colors any more, but Black definitely has the better minor piece.

I won’t pretend that Black has anything more than a draw if White plays sensibly, but my point is that this position will really be quite pleasant for Black to play, because his pieces are so active and he has the more dangerous threats.

Instead in the diagrammed position I played the horribly unthematic 13. … f6? This is a huge concession, blocking my bishop’s pressure against d4. You should never play this move if you can help it — better to sac a pawn than to make your pieces inactive. I eventually lost the game. Obviously, in 2001 I had not yet understood this variation.

Six years and many games against Fritz later, I handled it much better against Pedram Atoufi, again in Las Vegas. From the Basic Position it went 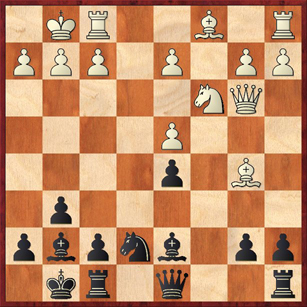 This must have been an unpleasant shock for my opponent. It is yet another case where Black does not need to bother with defending his d-pawn. But one has to ask: If winning the d5 pawn doesn’t give White an advantage, then what the heck is he playing for in this position? I don’t know. My opponent couldn’t figure it out, either. 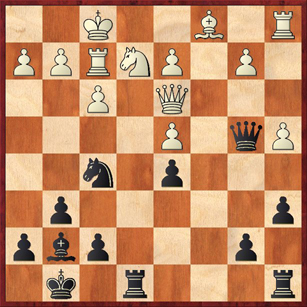 Here I should have been winning, but I played too mildly with 19. … Nxd4? 20. Nxd4 Qxd4?, completely letting my opponent off the hook, and we eventually drew. According to Fritz, Black has about a three-pawn advantage after 19. … Bxd4!, the point being that White either has to give up the exchange or play 20. Nxd4 Nxd4, and the knight is going to settle down on b3 and cause chaos in White’s position.

So sometimes, I guess, taking with the bishop on d4 is the right thing to do after all!

Okay, now that we are not afraid of 7. cd any more, let’s turn to the last suggestion in Mark Ginsburg’s post. He suggests that “the TN 7. Qa4!” might be a good try for White. This fits in nicely with my chronological approach to this line, because one of my most recent games in this variation, the game Josh Friedel — Dana Mackenzie from 2007, went exactly this way. If you’re interested, Friedel (who was an IM at the time, and is now a grandmaster) and I gave a joint lecture on this game at ChessLecture, called “Crouching Bird, Hidden Ruy.” This lecture was a not entirely successful experiment. One of our subscribers had suggested having two ChessLecturers talk about a game they played against each other, and I thought it was a great idea. However, it is very difficult to give an organized, coherent presentation when you have a co-lecturer who may have completely different ideas of what he wants to say. So the lecture was, shall we say, a bit disjointed. Not only that, I had microphone trouble, so while we were talking about the endgame I got cut off for about five minutes, giving Josh a great long soliloquy where he’s rambling on and I’m not saying anything … Anyway, it was fun, and interesting.

So Josh had the same bright idea that Mark had, and played 7. Qa4 (diagram). 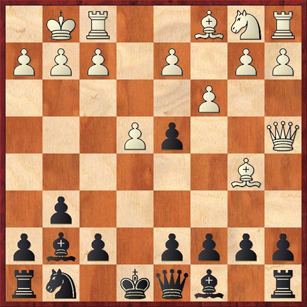 This was a surprise to me, because I had never studied this move, but I was not unhappy to see it. To me, White is showing an unhealthy (for him) interest in winning the pawn on d4, and neglecting the rest of his development. Mark’s analysis (7. … c6 8. Bd3 b5?) shows that he thinks Black needs to do something to stop White from winning the d4 pawn. And I admit, I was tempted to play … c6 and … b5, but eventually I came to the same conclusion that Mark did, which was that it just creates a target that White can exploit with a4.

However, if you have read and understood this post so far, you understand that Black does not have to be at all worried about the imminent demise of his d4 pawn. And you also understand that Black’s most principled plan is the same as always: Blockade first, and win second. Therefore, the correct procedure is … c6 followed by … d5. 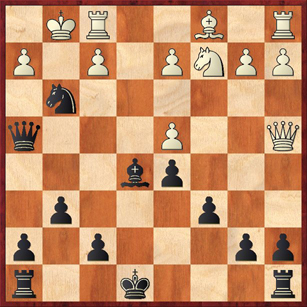 However, Black doesn’t have to play for a draw; another very good possibility after 10. e5 is … f6, either immediately or after castling. I just don’t think that White wants to play for this brittle, overextended pawn formation in the center, when his queenside development is all tangled up, the queen is a long way from the kingside, and Black’s pieces are very well poised for a kingside attack. 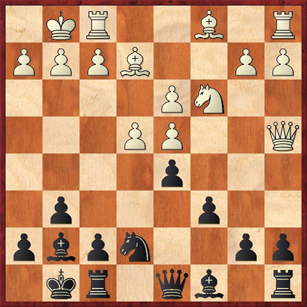 Here Black should still play 11. … de 12. de Qxd4, but it’s no longer as good for him because White has the nice answer 13. Qa3!, “tickling” the loose knight on e7. Black can defend it easily enough, but he loses time doing so, and White can develop some good pressure with moves like Bg5, Rad1, etc. Watch out for undefended pieces! Ironically, it turns out that Black’s king was actually more useful on e8, defending the knight, than it is on g8. That is why Black should have played … d5 earlier instead of waiting.

I didn’t like the looks of this, so I went down the road of playing a bona fide gambit with 11. … a5?! 12. Be3 b5 13. Qc2 Qb6 etc. If you want to know how the game continued, you should watch the lecture; I won’t go any further here because Black has clearly gone off track.

There was, however, one interesting comment that Josh made during the lecture. Even though White has gotten an advantage here, it’s still not exactly the kind of position that he is accustomed to playing in a Ruy Lopez. Josh is an excellent Ruy Lopez player, but he was a little bit out of his element, and eventually made a mistake that let me reach a drawn endgame (which, however, I botched and lost). He said, as a sort of apology to ChessLecture listeners, that he can play better than this: “I really do win games by attacking now and then.” So even though the opening went badly for me, in a way it actually worked, because Josh was not able to get the sort of attacking position that he likes and knows how to play. If I had played a main line Ruy Lopez against an IM-soon-to-be-a-GM like Josh, would I have survived and reached a drawn endgame?

I think you may find the same thing happening to your opponents if you play the Bird (or Blackburne) Variation. They will be faced with unfamiliar strategic problems, and there’s a good chance that they will not find the most accurate moves. Even if they do play perfectly, you should have faith that the variation is strategically sound; but it’s an extra bonus that in many cases they won’t.