Bird by Bird, Part 3A

We now move on to the third part of my series on the Bird Variation of the Ruy Lopez, and here it will get a little bit more challenging for Black. Michael Goeller notes, in his comment to “Bird by Bird, part 2,” that he has been playing the Bird Variation for a long time but always stuck to the classical variation with … Bc5. The Chess Authorities look down their noses at … g6 and … Bg7, which is supposed to be bad. So the main point of my next two posts is going to be that this variation is actually quite playable for Black.

The argument against this line is that Black has already wasted a tempo by playing 3. … Nd4, and now he proposes to waste another tempo by developing his KB in two moves instead of one. Can Black really afford to lose two tempi in the opening?

In the end it will come down to concrete analysis, but as long as we’re speaking in terms of generalities, here is my view.

White can play 6. f4 here, but it’s difficult to see what the point is in doing so. He can’t checkmate Black without the participation of his queenside pieces, so he will need to play d3 anyhow. However, I did play one tournament game where my opponent adopted this hyper-aggressive approach, and what happened is kind of interesting. My opponent was Jeremy Fremlin, a teen-aged player in Santa Cruz who used to play a lot, but I haven’t seen him in the last three or four years. I think his rating was around 1600, but he was really closer to 1800 strength. This game was from 2001: 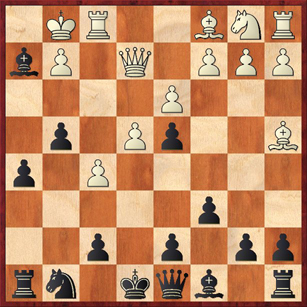 This is one of the most bizarre games I’ve ever played! Twelve moves into the game, Black has only one developed piece and White has three. Black then  sacrifices his only developed piece, and White resigns! It’s mate if White takes the bishop, and pretty god-awful if he doesn’t. 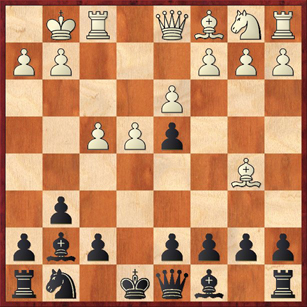 Starting point of the f4 Variation.

Of course. Again, there is no point in waiting around. I did play 8. … Ne7? in one of my earliest games, and should have gotten destroyed after 9. f5! gf 10. Bg5! Black now has no good way to get in his … d5 break; if he does it, his king will get caught in the center. If he castles, White will play ef and f6. However, I got lucky — my opponent played the weaker 10. ef d5! Black blocks the bishop’s diagonal, and now 11. f6 is not particularly dangerous. In fact, it opens up the g-file for Black’s rook, and Black went on to win in Bedell-Mackenzie 1988.

This is what White almost always plays (6 times out of 7 tournament games) but I wonder whether 9. Bb3, as played by Bob Rowley against me in 1999, might actually be better. The point is to keep the tension and in particular to keep the option of f4-f5 open for White. As we’ve seen in the line above, f5 not only threatens f6, it also gets the f-pawn out of the way of the QB. As I’ve said above, one of my main objections to the f4 Variation is that White blocks in his own QB. So playing f4-f5 should be a high priority for White. 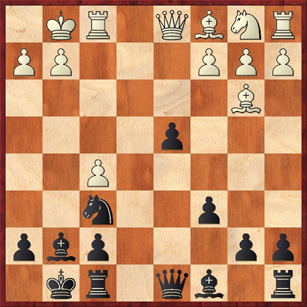 Has the computer lost its mind?

Even though I told you that Black wants to goad White into attacking on the kingside, this seems to me a little bit extreme. Black castles into a compromised kingside, where White already has a pawn looming on f5 and has great diagonals for his bishops — and yet Fritz somehow thinks this position is even. Well, after 30 minutes of thought my copy of Fritz 9 gives White the tiniest of advantages, 0.29 pawns, after 13. Bg5 h6 14. Bh4.

And now White has a choice of three checks: 10. Re1+, 10. Qe2+, or 10. Bb5+. But in the first two cases White normally follows up with the bishop check anyway, so for practical purposes they are all the same variation. 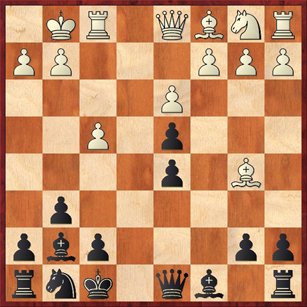 This is the key, and very distinctive, move of the f4 Variation. I avoid playing 10. … Bd7 for two reasons. First, after 10. … Bd7 11. Qe2+ Ne7 the possibility of f5 worries me (perhaps after 12. Bxd7+). By sidestepping with the king, Black keeps control over the f5 square with his bishop. Second, Black realizes that White’s bishop on b5 is in a very exposed location. In fact, Black is threatening to trap it right away with … Qa5. We’ll see that this theme of the undefended bishop comes up over and over again. Although with … Kf8 Black forfeits the right to castle, he plans to castle by hand with … Ne7, … Bf6, and … Kg7.

This position is more likely to arise by transposition (10. Qe2+ Ne7 11. Bb5+). Other possibilities for White: 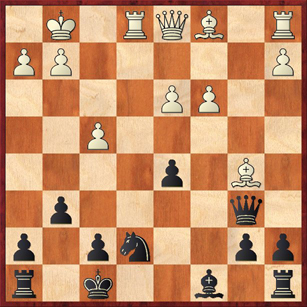 Oops, there goes the bishop. 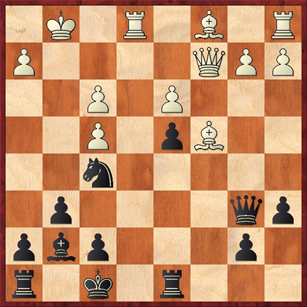 Bekker-Mackenzie. A dream position for Black. 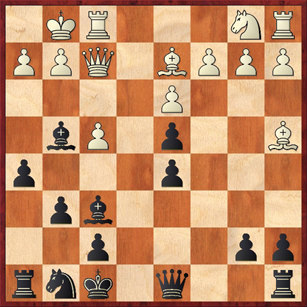 After the game, Michael said that he felt White had a long-term advantage because the doubled d-pawns are a weakness that won’t go away. But in my opinion, Black has several compensating factors. The doubled pawns create more files for his rooks (the c- and e-files) There is a beautiful square for the knight on f5, although the bishop will first have to vacate g4. If White should ever play h3, then the dark squares on the kingside become a real weakness, and Black can try to play Bh4 and Bg3. Finally, those allegedly weak d-pawns have a real cramping effect on White’s position; they keep his white-squared bishop locked up on the queenside and they keep the dark-squared bishop from going to e3. All in all, I think the position is in a state of dynamic balance. 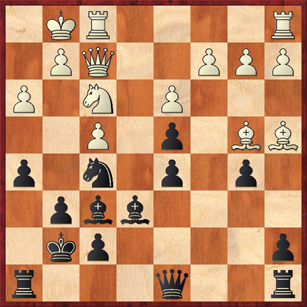 Oops, there goes the bishop (again!).

Oh well, this is just fantasy chess, but I wanted to remind you about the combinative possibilities that arise from White’s undefended light-squared bishop.

Maser is blissfully unaware of the danger to his b5 bishop. He should have played 12. Ba4, transposing to something like the Aigner-Mackenzie game.

Here we go again! White’s bishop is trapped. However, Maser comes up with some ingenious counterplay: 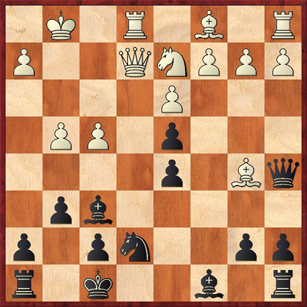 If Black takes the bishop on b5, he has to give the piece back after 15. g5. However, Black has a completely safe and sound alternative here, which is 14. … Bxg4 15. Qxg4 Qxb5. Not only is Black a pawn up, but he has the same sort of solid, unassailable king position with the knight on f5 and the bishop on f6 that we saw in the Bekker game.

Alas, I wasn’t satisfied with winning a pawn — I got greedy, and I insisted on winning the whole piece. Mostly, I just didn’t believe that White’s attack was worth a whole piece. And so I played 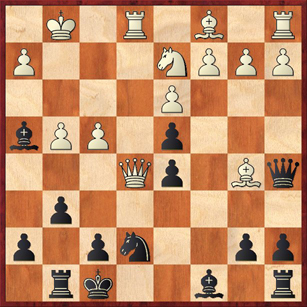 Now White plays an amazing move. With a bishop and a rook hanging, he doesn’t defend either of them, but instead plays a move that opens up a file for me to attack his king!

You might be surprised that I would show you a game where Black got crushed in an opening where I’m advocating the Black side. Well, there’s some method to my madness. First of all, we have to learn from our mistakes. It’s important to understand what can go wrong if you misplay the position. Second, I wanted to show this game because it’s probably the most brilliant attack that has ever been played against me (even though I think my opponent was forced into all those sacrifices by sheer desperation). And third, from the point of view of opening preparation, the main thing is that Black could have had an easy advantage after 14. … Bxg4.

So, to sum up part (A) of the f4 Variation, we have seen that White can get severely punished if he pushes his pawns too rapidly without developing his queenside first. We’ve seen that f4-f5 followed by Bg5 (or Bh6, in the Maser-Mackenzie game) is a dangerous plan for White, and so Black should do his best to prevent the f5 break. That means he should reply to Bb5+ with the unexpected … Kf8! White must be very wary of threats to his exposed white-squared bishop, and in fact he has to lose a tempo with Ba4 to keep the bishop safe. Black has plenty of time to bring his king to safety with … Ne7, … Bf6, and … Kg7. The game will then take on a positional character, with White trying to exploit the static weakness of Black’s doubled d-pawns, while Black uses his space advantage (given to him by those same doubled pawns) to create dynamic activity for his pieces, especially the knight, which will go to f5 and then possibly to e3 or g3.

I was going to cover part (B) — the retreat 8. Ba4 — in this entry, but I can see that the entry has already gotten extremely long, so I will stop here and talk about 8. Ba4 next time.