In my previous “Bird by Bird” entry I outlined the general strategic themes of the Bird Variation of the Ruy Lopez: 1. e4 e5 2. Nf3 Nc6 3. Bb5 Nd4. Note that although White has lots of plans available, Black’s plan of development remains fairly consistent over all of the variations: the plan is to play … g6, … Bg7, … Ne7, … c6 and … d5 in some order. So I am going to categorize the main variations, as I see them, according to White’s development plan. For each variation I will also show you which post I will discuss it in, and my lifetime tournament won-loss-drawn record.

As you can see, probably the most critical variation is the Center Variation, but it’s not the one you are going to face the most often. Today, however, we’re going to start with the 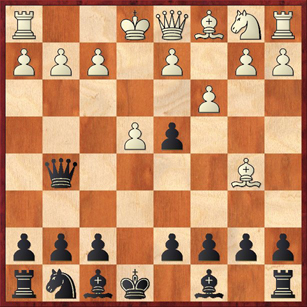 In some sense you don’t really have to study this line. As I said in my last entry, White will only play 5. c3? by mistake, and it’s an immediate sign that he doesn’t know this variation. However, I do want to devote an entry to it for two reasons: first because I have a couple of really nice games to show you, and second because you will face it now and then and I would like to offer a few words of advice.

The first advice is do not get cocky, especially if White plays 6. Bf1. Yes, he’s sitting there with egg on his face because he has had to undevelop his only developed piece. But just remember that having egg on your face is not fatal. White has created no weaknesses. Black, by contrast, does have a somewhat shaky pawn on d4, and also his queen is in a very strange place and will have to relocate. The good news for Black is that he has gained a tempo (or two) and has the initiative, and thus he can look forward to extremely comfortable equality. But Black does not really have an advantage yet. Your best hope is that your opponent, who has already been rattled, will make some more mistakes.

So 7. … Qf6 seems better. The only problem with this move is that after White’s response 8. Qf3, an early queen trade is in store and the position could get somewhat drawish. Another possibility suggested by Fritz is 7. … Qh4?!, with the idea of trying to tempt White into playing 8. g3? Qf6! and now Qf3 is not possible. However, White has plenty of other possibilities besides 8. g3, and the queen on h4 will be just as vulnerable as it was on g5, so I can’t really recommend this.

However, things get a little bit spicier if White, instead of playing 6. Bf1 and calmly accepting the egg on his face, decides that he wants to keep his bishop developed with 6. Be2? Here is a case where White, by failing to admit his first mistake, makes matters worse by committing a second one. Now the pawn sacrifice 6. … d3! is really promising for Black. I’ve had two tournament games with this move. One of them, Robert Cale-Mackenzie 1990, was a bitter and shocking defeat for me, which I will show you below. It’s a great lesson in hubris. Fortunately, I got a chance to redeem myself 12 years later in Mantri-Mackenzie 2002, a game for which I won a (somewhat undeserved) brilliancy prize. I’ll show you that game as
well. 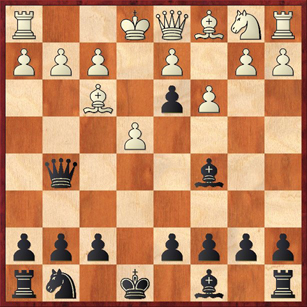 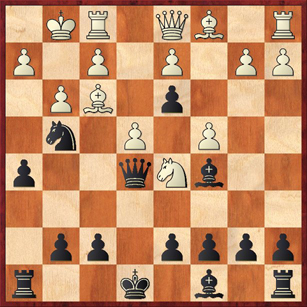 Here I thought for a long time about “brilliancies” such as … Nxf2 or … Nxh2 and concluded that they didn’t quite work, and one of the main reasons is the knight on d5, which can come back to e3 and gum up the works. So then I thought about how I could bring more material into the attack. The move 12. … d6 seems natural, but oops, it hangs the exchange because of 13. Nxc7+. But wait a minute — if White plays that move, then it removes the knight on d5 from the equation, and all of Black’s sacrifices work! So I played

This is where I started to display hubris, which the dictionary defines as “excessive pride or self-confidence.” After playing this move I was sure that I was going to win the game brilliantly, and in the moves to come I was first frustrated by my opponent’s strong defense and then failed to see his counter-threats because I was so preoccupied with checkmating him.

Excellent! White passes up the material gain and uses his knight, as I said, to gum up the works.

White cannot simplify with 16. Nxg4 hg 17. B moves because of 17. … Rxh2!! I’m still in my comfort zone, with brilliancies floating around ready to be snatched. 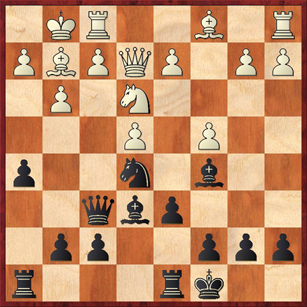 Instead, I played 17. … Bxe3?, thinking I was going to win my pawn back easily with 18. fe Bxc4. But White crossed me up with 18. Qxe3! Bxc4 19. d3! A tremendous shot. Now it’s White who is shedding pawns in order to get at Black’s king. Probably I should have continued 19. … Bxd3 with the plan of defending with … Ba6, … c5, … Kc7, and … Nc6. I think Black is still okay here. That would have been sophrosyne, the opposite of hubris, defined by the dictionary as “prudence, moderation.” 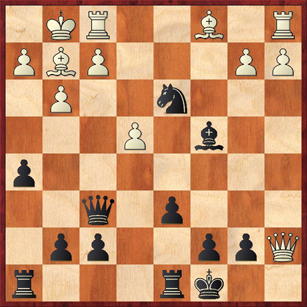 What a turnaround! I still have to admire Cale’s resourceful play. He may have gotten egg on his face in the opening, but in the end he threw the whole chicken coop on my head.

I finally did get to play a brilliancy in this variation, but it was twelve years later, and again I almost blew it! This was a game against Ramesh Mantri, played at the Monterey Chess Center, a run-down but beloved chess and darts emporium that was run by Ted Yudacufski. Ted organized tournaments there once a month, and now and then if there was a game he particularly liked, he would give out a brilliancy prize the next month. I think it was maybe $20.

By the way, another very instructive line, which shows how much trouble White can get in to, occurs after 8. Qb3, which is the computer’s recommendation. Now 8. … Nf6 9. Qc4 O-O 10. O-O (not 10. Qxd3? d5! — always the thematic move) Re8 11. Qxd3 d5! 12. ed Bd6. Black has all of his pieces trained on White’s king, and … Ng4 is in the air, while White’s pieces on the queenside are just dead wood. With the text move White tries to speed up the development of his queenside.

White still has ideas of playing c4, both attacking the d3 pawn and threatening to trap Black’s bishop on b6. But this move ignores the peril on the kingside too long. A better try was 10. O-O, but even here the computer says Black has plenty of compensation after the thematic 10. … d5. 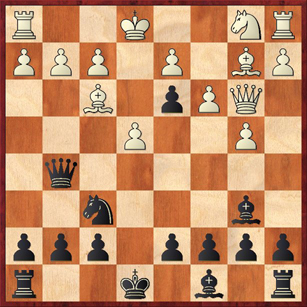 Black to play and win.

(Note: If you’ve been reading attentively, you should find the winning move in 5 seconds or less.)

I don’t know if I can even call this a brilliancy. It’s just the thematic move. Black blasts open the center before the White king can reach safety, and while the White pieces on the queenside are all still tangled up. 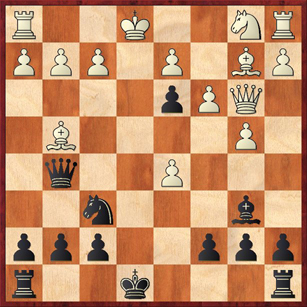 And now I almost botch it.

White botches it back. After 13. Kd1 Nxg4 14. c4 Nxf2+ 15. Kc1 now Black can’t take on h1 (as in the line above) because the queen on e5 is hanging. This gives White time to construct at least a little bit of a defense. After the text move, White is just blown out of the water.

Finally White rounds up this pawn, but the rest of his position is completely busted.